While I had always avoided, as a performer and composer, to settle into relics of folklore and traditional repertoire, I have first become passionate about the 40’s and 50’s repertoire through the prism of popular sung poetry. I would listen for hours and hours to improvised oratory poetry, which is considered to be an ultimately perfect musical form (Zajal), through the voice of Zaghloul el Damour, (the Nightingale of Damour), Moussa Zgheib and Khalil Rukoz, the wedding chants and the Sufi rememberance recitations (Zikr) and Syriac rituals, marveling at the prominence and abundance of poetry and music in each and every aspect of Lebanese life.

Thus, my sound universe become temporarily inhabited by the twirl of that world, acting like a reverberation of its sounds. It drove my composition process to new directions. I started working on this project from a passive, observant angle. I spent hours listening, meditating on material of different sources, and transcribing it in order to contemplate it in form of black ink on white paper. Then the process of dispossession, disintegration and re-appropriation had started… Or at least that was what I had planned for my next steps to be. Soon enough, I found that my strong emotional ties to that music – to that immaterial soil I belonged to - were keeping me from adopting the necessary distance I needed to be able to dissect, abstract and recreate. I found myself unable to expand a personal language at the expense of what I viewed as the legacy and soul of these recordings. I could not get myself to denaturize them, almost like I did want to vandalize that temple.

I couldn’t at first grasp the nature of that resistance. I was also becoming anxious at the thought of meeting deadlines and having enough time to learn and mature the material. So I just temporarily gave up –or gave in-, trying to accept that perhaps those recordings would not have a life beyond their patrimonial state. But additional hours of listening, listening and observing soon unfolded to me the extraordinary hidden complexity all this music contained. It is true that Arabic music is made of essentially monodic lines. But when listening even deeper, one can notice that harmony patches are already there, and that polyphony is already there. Counter-lines, counterpoint, rhythmical expansions, metric modulations.

Everything was in there, suggested, subtle as ever, left for imagination to discover. That was why I could not manage to hear anything else. It was during that process of understanding and acknowledgment that the materials stopped acting as constraints, and became elements of my own musical material, just as much as my imagined sounds were, and were able to be integrated with every degree of freedom into a new musical discourse. So instead of the pretention of ‘developping’, I went back to listening, observing, unfolding, discovering, and trying to make the expanded versions of this music emerge. What seemed to me like an utterly selfless and cathartic journey made me then redirect my questioning of the essence of that music to the act of composing itself.

We as Western-trained musicians of Eastern tradition tend to treat and regard our own heritage as a primitive culture that needs to be developed and saved. We also regard the act of composition as the bridging between an ontological gap between two distant cultures, the reconciliation between past and present, and an eternal questioning of the simplicity of a repeated melisma.

Heritage doesn’t need seemingly well-trained musicians turning its simplicity and purity to complex monuments to be saved. It only needs to be deeply listened to. Working on that repertoire collection has also revealed the striking force that a melody can have, and its ability to travel from region to region, all the way from the banks of the Euphrates to Mount Sinai. Unity through thousands of wandering melodic figures remains as forceful as ever despite the tumultuous history and partition that this area of the world has seen.

Sung texts are always subject to the ambiguity of language, and the chapters of a sung epic always witness variations in the story from an area to another, alteration in subjects, accent and dialect inflictions, and different choices of words. But the melodic lines that carry these texts remain almost unchangeable. When looking for a Qarradi or a M’anna from Mount Lebanon, you cannot not stumble upon a variation of that same form in the Syrian Djeriza, in another dialect or even another language. In that same vein, it would be enough to listen to the Aleppine Qudud recorded on a summer night near the Citadel to hear them echoing back in another recording made in the Chouf valley of Southern Lebanon, or another one coming all the way to the narrow streets of Jerusalem. Much like our free-spirited Bedouins, our music does not know of the disintegration of the Fertile Crescent into several little states, nor of the dividing of land and history. It does not know anything either about the birth of crisis and strive for existence, identity and domination in between those freshly pencil-drawn frontiers. It testifies of the forever-intertwined, common destiny shared by every grain of soil and water, every soul living in the different lines of that newly-decided map.

From the cradle to the grave, in nuptial festivals as in funerals, the very same rhythms and melodies trace and mark every stage of life for Assyrians, Syriacs, Kurds, Arabs and Gypsies. What could transcend geopolitical deals and whirlwinds more than that thought?

"Lost, maybe found in transcription" - Feature on The Sampler

"Past and Present Streams : Reflexions on the creative process for Mkhammas" (In German) 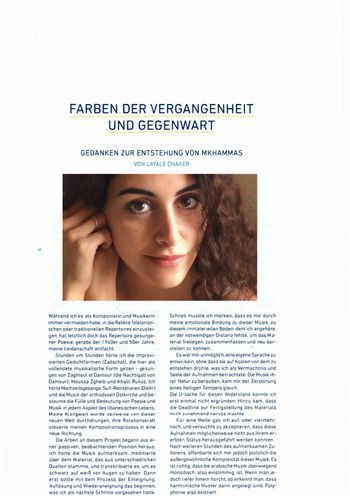 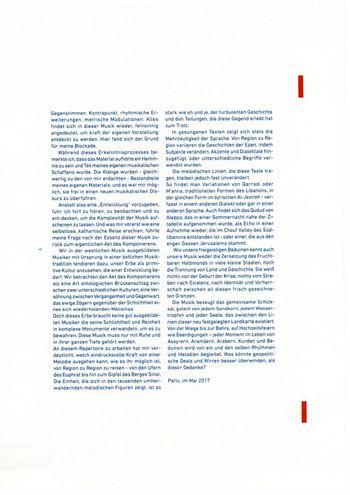 “One evening in Lucerne, we gathered to watch a documentary film about Edward Said, where the late Palestinian intellectual chronicled aspects of his personal life ... (Click for more)”